Info: idk yet really. I'm making the story as it comes along in my mind. Will be intricate, knowing me. So far -- it's about a man who is part of th project Blink. This setting takes place in the future, and will eventually progress to the past via time travel. There are supernatural powers, yes. Also, there is an air of mystery as to why the "accident" that will be referred to throughout, happened and why. The rift is simply a rift. A dimensional wormhole or a space of emptiness -- you decide until it is determined. There are many main characters and the chapters will change viewpoints accordingly. The goal to be achieved is to cure Dendle as well as many other things unknown. What does he have? read, and continue to watch until you find out...
Genre: Sci-Fi, Historical (eventually), Noire, Supernatural.
Rating : PG-13 until said otherwise.


Dendle was panting heavily; Hefting his heavy black backpack, he forced himself to keep going. “Come on,

you cheap buzzard…I’m not done yet.” Grunting, he swung himself over the smooth precipice of the chrome building, legs

dangling down like a rag doll, he landed on the edge, teetering between safety and oblivion. Bouncing lightly, breathing

heavily, and aching of weariness. The street lights seemed to illuminate the way down. Almost like a delicately

made hopeless filter coming from a dark abyss. Almost never-ending in their soft, pulsing luminescence... “Beautiful.”

A cold trickle was seeping through his arm as the numbness rose. Stifling his breath, he cracked his neck. Looking up at the stars, shaking his head, he grinned as his tears were streaming out of his bright green eyes.

They twinkled as they reflected the unknown above... Sniffling, he shook his head. The mane of messy black hair settled

over his face. Sighing heavily, eyes drooping and smiling. He uttered one word as the warm light faded.

The world dripped down like an oil painting, and a wisp of a fluttering wind passed by the body that was no longer there.

-“The Blink project's subject 9. Just some minor problems with the restoration, sir. Nothing to...worry about...”

-“It was just up and running a couple minutes ago.”

-“A couple minutes ago, Dendle was still on our radar.”

' Ch. 2 : Transmission 1 : Confessions of the Soundless':
“So, how’s Subject 11 doing?” The white, lab-coated scientist asked. The bland workmen almost disregarded him as they continued working and typing away at their busy computer screens. A keyboard stopped making noise as the owner of it stopped clacking. Wheeling around from his computer, the man closest to him answers briskly with a slight cut Russian accent, “He’s coming along terrific! His vital functions are promising and his regenerative properties are astounding. His metabolism has even evolved so that he no longer needs to eat as much as a normal man. It’s as if we have perfected Frankenstein and amplified it. However, the appearance of this one is, regrettably and un-changeably …hideous. We have nothing for it.”

The scientist raised an eyebrow. “Really? I wonder then, why he still is under such close care when he could be out testing.” His blonde hair fell over his blue eyes as he gazed softly at the man in the chair. Such bountiful sorrow. I wish people would have ambitions rather than follow orders like a pup. At least then there could be achievement and a sense for going beyond rather than just meeting minimum results.

Tap. Tap. Tap. Schhhiick. Jerking around, the scientist stole a glance to the window on his left—showcasing the specimen. His eyes went wide as he peered into the membrane like opening. The specimen was looking at them. It tapped once again with its scaly claws, dragging them down the thin glass. Its wide, black eyes reflected the entire workroom as it observed them. Tilting its head side to side, it tapped again. Its green skin morphed and bubbled as if worms were crawling underneath its surface, struggling to get out. Even its humanoid body seemed to be as if was mismatched, and meant to be an animal of the sea.

“What…is that exactly?” The scientist asked, smoothing his hair over with his right hand.

“That is subject 11, sir. He has not responded like this before. Actually…He hasn’t ever really moved much before.”
-“Interesting. Very interesting. Uhhh… Keep him under observation, actually. I want to know more…”

-“Subject 12 is the same sir, only humanoid looking and passable as a common alpha male. Would you like to see him?”
- “No. what’s the interesting part about that, eh?”
-“Of course, sir. Anyway, The Director, I hear, was meant to make a…uhhh… special…appearance today?”
-“Mind your own business.”
-“Of course. Sorry sir.”

The scientist took one look back at the subject. Shuddering, he squinted as if the sight burned. It was still staring, clicking its wide eyes slowly, regarding him with an almost mild interest. And hunger. A tentacle seemed to flail from behind it. Blinking rapidly, the scientist turned around to leave.

The white doors were swiveling to and fro. The scientist glared at the short man who had bumped into him before walking out of the beeping room. The subject looked on through the doors., as the busy scientists scribbled away furiously.

The scientist scanned his name badge on the door swipe before beginning a retinal ID check to go to the next room. Subject 2. “Wheeler Ithuriel recognized.” The monotonous female voice pinged before it opened the doors with a hydraulic hiss. The nuts and bolts screeched and turned with a clicking noise as the door rose upward.

“Hello Mr. Ithuriel. How are you today, sir?” The fat security guard asked. His chubby boyish face was split ear to ear with genuine glee. The black janitor outfit he wore was starting to show signs of wear and tear, as the single stripe that ran down the misplaced right side of it was ripping.[/font]

“I don’t know sir, as always. Not like I can go in. All we have is these cameras that look in, after all. Heh. And all he does is hide in that dark corner.” Kery quickly said, shuffling his unnamed black shoes, his smile quickly dimming.

“Hmmmm. It’s been 3 weeks. Has nothing happened?” Wheeler furrowed his eyebrows, walking over to the station where the outdated televisions sat. There were 16, neatly aligned 4x4 TV’s in the room, all next to an array of paneling and colorful buttons.

“Wait, what? Why would you not…? Really, Kery…?” Wheeler shook his head, exasperated. “You need to tell me these things.”

“I’m sorry sir.” He pouted, “But it just throws me off…being near him…even watching him. It’s like he’s the one watching me.”

“It’s alright…just… remember what you need to do and learn…” Wheeler brought up Subject 2 on the screen. The television on the far right buzzed to life slowly as it showed the bare front room.

There was a steel rafter that ran higher as it went along—starting from halfway up the room and ending at the top. There was also a secondary back room that was used after the first room was gassed so they could give food to it safely. The first room was filled with live rats and animals muddled about and moving in circles. A dark smudge covered the back corner near the secondary room.

He returned to his clipboard shivering in a cold sweat. Even from here, he could feel it. This one always struck him as odd…almost intelligent. As if it knew things that he didn't. As if it truly was watching him, rather than the other way around.


The clipboard made a loud clattering noise as it hit the floor. Wheeler's eyes were wide. The subject had not moved. I swear…what was that…? What…?

The smudge started moving slowly, like a newborn bird unfurling its wings. Then it remained still once again, as the screen fizzled to black.

Criticism is appreciated as well as comments and advice ^__0 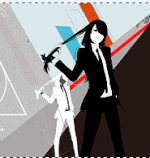